Cavitation and net positive suction head (NPSH) issues are common detriments to effective pump operation that are often misunderstood. Entire plant systems can fail unexpectedly as a result of a mechanical-seal or pump-component failure. Plant operators may observe: “it sounds like gravel is being pumped through our pipe” or “the pipe is shaking” or even “the pump components have dissolved into nothing.” When such failures are assessed further, operators often conclude that cavitation and NPSH are ultimately to blame for the seal and pump failure. As a result, all process engineers know that pump-suction design is most critical to ensuring reliable operation of any piping system.

Although NPSH sometimes seems confusing, it can be simplified when viewed as a part of a monetary budget. In the same way that a company may default if withdrawals exceed deposits, a pump may be destroyed if it withdraws more NPSH than the NPSH budget provided by the piping system. In short, a pump should not withdraw more NPSH than what is provided by the piping system. If the pump has a surplus of NPSH (i.e. NPSH required is less than NPSH available), then vapor is not formed and there is no potential for cavitation. Conversely, if the system has an NPSH deficit where the pump withdraws more than what the system provides, then vapor will form and destructive cavitation will occur.

What is cavitation? Cavitation is the implosion of vapor bubbles within the pump’s pressure stages. Cavitation occurs only if vapor exists. Systems without vapor do not cavitate. So where does vapor form? Vapor can form upstream of the pump, within the pump, or both. Pump operators know cavitation as noisy and destructive. When vapor implodes, the liquid walls collapse and produce shock waves of incredible force that cause destruction upon impact. Like a small jack hammer striking a surface at a rate of 10,000 times per second, cavitation shock waves damage all surfaces, no matter the hardness or thickness.

These shock waves can cause excessive vibration and noise within the pump, which can result in significant damage to internal components. This cavitation damage will set off a chain reaction of negative effects that can include loss of operational efficiency, elevated maintenance and part-replacement costs, pump downtime and, in the worst-case scenario, total pump failure.
Cavitation can affect the performance of all pumps. This white paper illustrates how a specific type of pump technology – positive displacement sliding vane – incorporates a revolutionary technology known as the Cavitation Suppression Liner, that mitigates and even eliminates the harmful effects of cavitation.

Plant operators and process engineers often focus attention on the pump’s NPSH required. After all, cavitating can be avoided if a pump requires less NPSH than the system’s NPSH budget. Unfortunately, this perspective misses that vapor is often formed upstream of the pump. This is especially true when transferring fluids with high vapor pressures, such as liquefied petroleum gas (LPG), anhydrous ammonia (NH3), gasoline, acetone, various types of refrigerants and condensates, and those that are highly viscous. The vapor pressure of these liquids is greater than any NPSH provided. In other words, these applications operate at a deficit from the start: the liquid demands more than what the system could ever provide.
Even in low-vapor-pressure liquids like water, lube oil or diesel fuel, the physical system layout may require poor conditions such that the NPSH budget provided by the system is so low that no pump could operate within the allowance.
An NPSH deficit is created in either of the above scenarios. A portion of the fluid transitions to vapor and creates a multi-phase or “boiling fluid.” The vapor concentration and size increases as the level of NPSH deficit increases. However, regardless of the vapor concentration or size, the vapor will implode during a pump’s pressure stage, causing violent reactions that are the root-cause of cavitation’s destruction.
There are a number of pumping setup conditions that can result in a dangerous NPSH scenario. These conditions include:

Long piping runs
Flow restrictions at the inlet, such as the presence of a piping elbow

• A clogged strainer
Partially closed valves that can restrict flow
Unnecessarily high flow velocities that are caused by undersized piping
An operator hears destructive cavitation as elevated noise levels during system operation. Vapor-bubble implosions within the pump will make it sound as if the pump is filled with bits of gravel.
If these cavitation-causing conditions are present and allowed to persist, damage to the pump and its components is almost certain to occur. Dynamic components are especially sensitive to cavitation. Specifically, the pump’s mechanical-seal faces will briefly separate as the implosions occur. The shock-wave pulsations create a condition known as “chattering,” which leads to premature wear and failure of mechanical seals. Additional failure should be expected in other wetted parts, such as bushings, impellers, back covers, volutes, casings, heads, gears, idlers and vanes.
While we know that cavitation can be minimized by optimal system design, system engineers should familiarize themselves with a technology that is well-suited for continuous cavitation service. Such technology would minimize or eliminate the destructive effects of cavitation and provide better performance and long pump life.

As mentioned, the key to eliminating pump cavitation and its harmful side effects is to eliminate vapor. No vapor means no cavitation. Alternately, system engineers can set operational parameters in such a way that the NPSHa (budget) will always meet the NPSHr (consumption). However, most systems require a bulletproof solution designed for the worst conditions – a one-of-a-kind technology designed for unforgiving physical constraints and inevitable vapor formation.

Blackmer®, Grand Rapids, MI, USA, a product brand of PSG®, a Dover company, Oakbrook Terrace, IL, USA, has built a 116-year reputation in industrial pump design and operation dating back to 1903. A major element to the Blackmer legacy is its benchmark series of sliding vane pumps, which have been pumping multi-phase liquids since 1954. Blackmer has improved the operation of its sliding vane pumps with the invention of the Cavitation Suppression Liner, which allows them to better transfer multi-phase liquids with high vapor pressures and zero NPSH.
The Cavitation Suppression Liner defeats cavitation through a design that defuses or mutes destruction before vapor implodes. In other words, it defuses a bomb before an explosion is triggered. This unique feature creates internal recirculation jets that break apart vapor bubbles before implosion. While the vapor levels are not reduced, the size of each vapor bubble becomes a fraction of what it would have been. The fact is this: smaller bubbles yield smaller implosion reactions.
The Cavitation Suppression Liner also allows a controlled amount of fluid at discharge pressure to bleed back toward the suction of the pump. This breaks the larger vapor bubbles apart into smaller vapor bubbles before they have a chance to implode. The net result is less noise, less vibration and less wear, which Blackmer verified by conducting side-by-side tests of one of its sliding vane pump models with and without Cavitation Suppression Liners (see Sidebar).

Blackmer offers its Cavitation Suppression Liner as a component on its CRL, LGL, SGL, XL XLW and TLGF (transport pump) Series Sliding Vane Pumps, which are available for use in the handling of a wide variety of fluids in both stationary and transport applications. Each of these pumps is rated to operate under continuous cavitation without any negative effect on pump-component life. In fact, the Blackmer LGL Series propane pumps have some of the highest cavitation levels (in cases of 30%-40% vapor), yet Blackmer offers its best 5-year warranty and 2-year guarantee within this pump series. This unmatched technology from Blackmer allows for continuous operation in extreme environments.
The Blackmer Cavitation Suppression Liner provides system engineers with a zero-NPSH required solution: a pump well-suited for low to negative NPSHa applications. Blackmer engineers are able to assess any problems in the pumping system. Perhaps it’s an application with numerous system-design flaws, such as long piping, undersized piping or tumultuous pipe routing. Most pumping setups would benefit from the operational flexibility provided by the Blackmer Cavitation Suppression Liner.

Unchecked cavitation will harm pumps in many ways, among them excessive wear of internal components, breakdowns, product leakage and compromised operation. Blackmer found the solution to the negative effects of cavitation through the creation of its Cavitation Suppression Liner, which can be paired with its rotary vane positive displacement pumps. The portfolio of Blackmer cavitation-duty products provides unmatched reliability in tough NPSH and high-cavitation applications. If you are struggling with a severe-duty application or problem pipe routing, you Better Get Blackmer.

About the Author:
Geoff VanLeeuwen is a Product Manager for Blackmer® and PSG®. He can be reached at [email protected] For more information on the full line of Blackmer pumps and compressors, please call +1 (616) 241-1611 or visit blackmer.com. Blackmer, Grand Rapids, MI, USA, is a product brand of PSG®, a Dover company, Oakbrook Terrace, IL, USA. PSG is comprised of leading pump brands, including Abaque™, Almatec®, Blackmer®, Ebsray®, EnviroGear®, Griswold™, Mouvex®, Neptune™, Quattroflow™, RedScrew® and Wilden®. You can find more information on PSG at psgdover.com.

Cavitation is caused when a pumping system’s net positive suction head available (NPSHa) is not in balance with the net positive suction head required (NPSHr) can be devastating for pump components and can even lead to system failure. Blackmer® has found a solution to the challenges of excessive cavitation with the development of the patented Cavitation Suppression Liner, which is available for use on most models of its Sliding Vane Pumps.

The imploding vapor bubbles within a liquid that cause cavitation in a sliding vane pump can lead to deterioration of the vanes (left photo). The difference in a vane that has been subject to excessive cavitation (left, in right photo) is obvious when compared to the appearance of a new vane.

The Cavitation Suppression Liner from Blackmer® eliminates the destructive «chattering» that is a result of cavitating fluids by breaking large vapor bubbles into smaller bubbles before they have a chance to implode. The result is less noise, less wear and less chance that the pump will be susceptible to disruptive failures.

The tests were designed to measure conditions and performance and show how to mitigate cavitation destruction. The test stand featured clear inlet pipe runs leading to the pump. All of the operating conditions were carefully controlled and monitored so that a fair evaluation of multiple pumps could be made under identical settings. Finally, gauges and valves were used to control the operating conditions with all inlet and discharge pressures able to be viewed in real-time on a computer monitor. 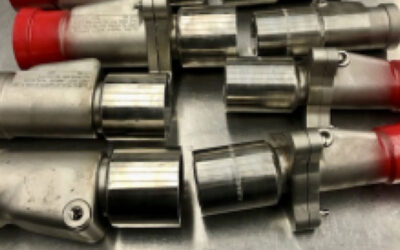